A fifth generation resident of Hernando County, Thomas S. Hogan, Jr. graduated from the University of Florida with a B.A. in political science in 1976 and Cumberland School of Law where he received a Juris Doctorate degree in 1981.

Thomas Hogan’s attorney experience includes: Assistant State Attorney of the Sixth Judicial Circuit, 1981-1984; Executive Assistant State Attorney of  the Fifth Judicial Circuit, 1985-1989; Board of Trustees of Pasco-Hernando Community College, 1989-1993 (Chair 1993); Judicial Nominating Commission of the Fifth Judicial Circuit, 1990-1994, 1999-2001, 2002-2006; He was nominated by the Florida Congressional Delegation to be U.S. Attorney in 1988. Mr. Hogan has been awarded the Victim’s Rights Award; was named an Honorary Lieutenant Colonel Aide de Camp in 1980; and has received numerous certificates of appreciation for commendable service during his career.

Mr. Hogan founded The Hogan Law Firm in 1989.  Thomas Hogan’s law office has become the largest full service law firm in Hernando County, with offices in Spring Hill and Brooksville. He currently practices law in the areas of General Business Law, Civil Litigation, and Government Law.  He represents the Hernando County Clerk of Court, the Florida Association of State Troopers, the Fraternal Order of Police, the City of Brooksville, and Sumter County, Florida. 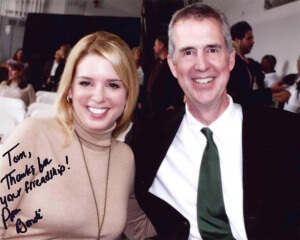 Mr. Hogan has represented business and litigation clients in Florida, Georgia, Louisiana, Texas, Arizona, Illinois, Alabama, California and New York as well as in Thailand, Singapore and Indonesia.  He has appeared with high-profile clients on such nationally televised news programs as Fox News and The Larry King Live Show.  Mr. Hogan is a member of the Hernando County Bar Association, the Florida Bar and the Alabama Bar.

Mr. Hogan has worked closely with local leaders and prominent members of the Florida law community, including Florida Attorney General, Pam Bondi (seen in picture). He founded The Hogan Law Firm, with a unique team of attorneys which includes over 75 years of combined legal experience to provide you the best in legal representation.

The information posted on this website, or in links provided by this website, are not legal advice or a recommendation regarding the legal issues noted herein; legal advice can only come from a qualified attorney who is familiar with all the facts and circumstances of a particular case and relevant law. All visitors to this website should consult an attorney regarding legal questions or needs. Confidential or time-sensitive information should not be sent through forms on this website. The use of the Internet or any form on this website for communicating with the firm or any individual member of the firm does not establish an attorney-client relationship. Submission of information via email or through the use of a form on this site does not mean that we will be representing you, absent an express written retainer agreement signed by us stating otherwise. The hiring of a lawyer is an important decision that should not be based solely on advertisements. Before you decide, ask us to send you free written information about our qualifications and experience.